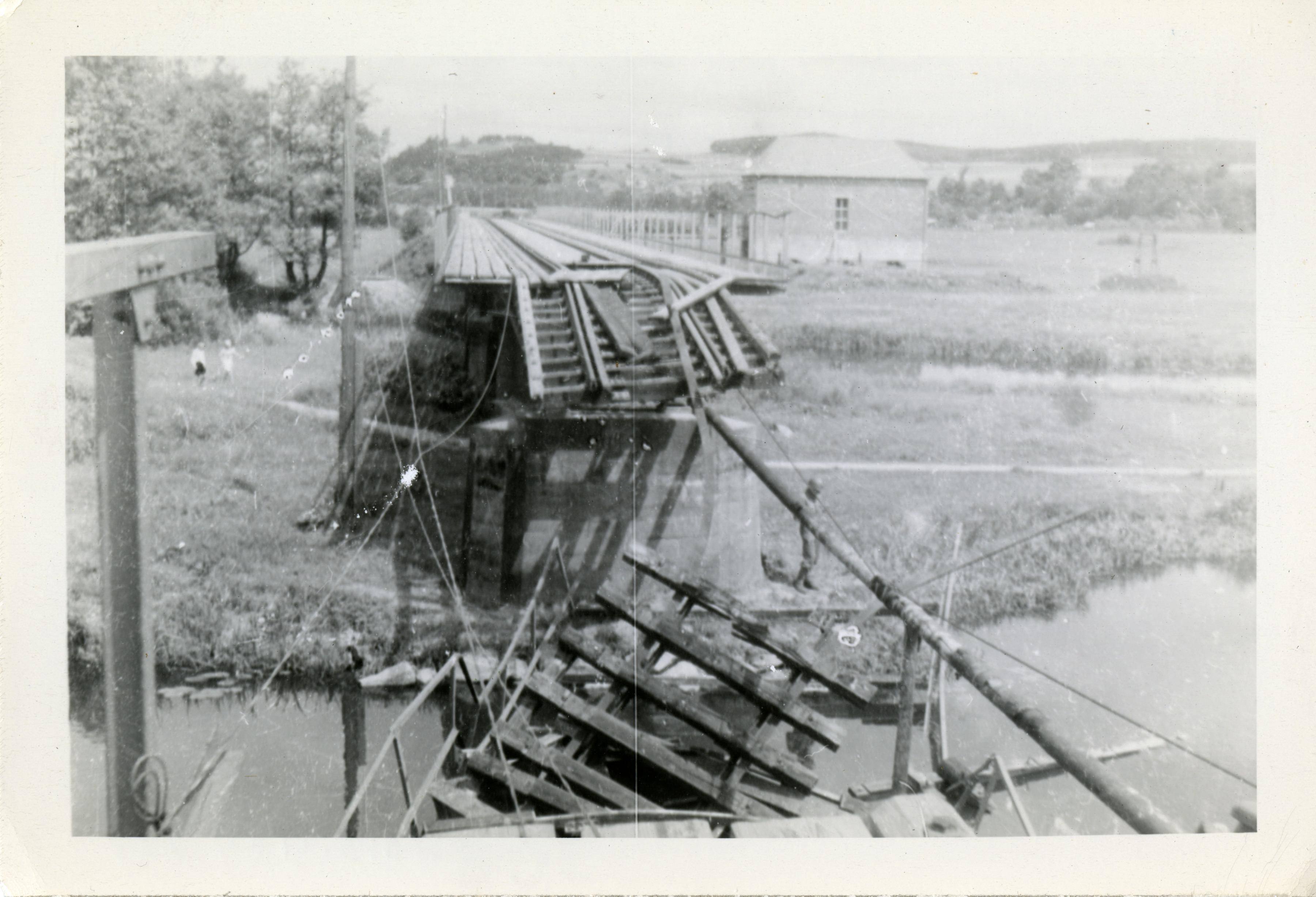 Photograph. Damaged wooden bridge over a small river; the portion over the river has been destroyed; a serviceman is standing at the base of the bridge on the riverbank; civilians are walking in the background. Burglengenfeld, Germany. May 1945. [cropped duplicate of 2015.457.073]

Donor:
Mrs. Roberta Berrien
Accession Number:
2015.457.225
Date:
1945-05-
Location:
Hometown:
Branch:
Theater of Service:
Unit:
512th Field Artillery Battalion
Third Army
Campaign / Event:
POW / KIA:
Topical Subjects:
World War, 1939-1945--Destruction and pillage--Germany
Railroad bridges--Germany
Collection Level:
Items from the service of Jack Hershkowitz, who was a switchboard operator in the 512th Field Artillery Battalion, Third Army in the European Theater of Operations. Hershkowitz was born on 18 February 1912 in New York, New York. He was working as a public service inspector in Lakewood, New Jersey, when he enlisted in the United States Army on 8 July 1943 and was called to active duty on 29 July. On 2 July 1944, Hershkowitz was shipped out to the European Theater of Operations and assigned to the 512th Field Artillery Battalion. By December, He was in Luxemburg, and in Germany by March 1945. Hershkowitz and his unit celebrated VE-Day in Czechoslovakia [modern-day Czech Republic] and were then assigned the task of overseeing Russian displaced persons and German prisoners of war. The 512th Fld. Arty. Bn. traveled throughout Germany to transport Russian troops and civilians from prisoner of war camps to transit camps. One notable location the unit traveled to was Dachau concentration camp. In September 1945, the unit began to make its way from Germany to Camp Brooklyn near Reims, France. They arrived in the camp in October and began their journey across the Atlantic Ocean on 23 November 1945. Hershkowitz arrived in the United States on 13 December 1945 and was honorably discharged on 20 December in Fort Dix, New Jersey. On 10 July 1982, Jack Hershkowitz passed away. The collection includes a field journal, photograph album, postcards, and over 200 photographs. The photographs feature life in the field, displaced persons camps, prisoners of war, Dachau concentration camp, and interactions with local populations.
Geography:
Burglengenfeld
Latitude:
49.206
Longitude:
12.041
Thesaurus for Graphic Materials:
World War, 1939-1945--Destruction and pillage--Germany
Railroad bridges--Germany
Bridges--France
Add to Collection