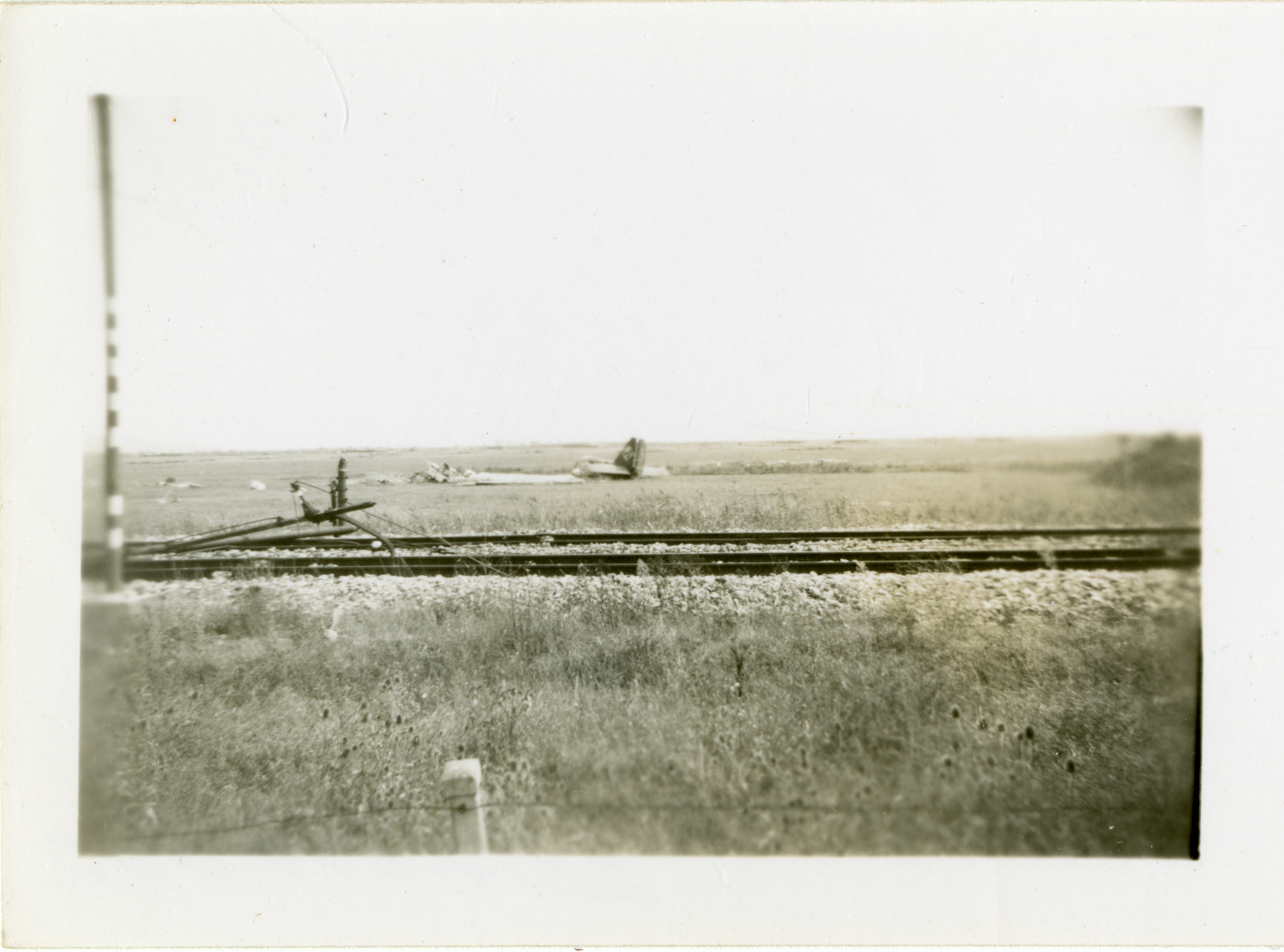 Photograph. Remains of a Nazi airplane sitting in a field; a railroad track is in the foreground. Presumably Italy. No date

Donor:
Mr. Nelson Farris
Accession Number:
2014.094.032
Date:
1944
1945
Location:
Hometown:
Branch:
Theater of Service:
Unit:
Campaign / Event:
POW / KIA:
Topical Subjects:
World War, 1939-1945--Destruction and pillage--Italy
Airplanes--German--Italy
Nazis--Italy
Collection Level:
Items from the service of Captain Richard Dach, who was a doctor in the Army Medical Corps and stationed in the Mediterranean Theater of Operations. Richard John Dach, MD, was born on 7 December 1914 in Reeder, North Dakota. He attended the University of North Dakota and then Northwestern University for his medical degree. Dach married Lilas Retzlaff, whom he met at Northwestern, in 1940 and then moved to New Orleans, Louisiana. On 25 July 1942, Dach enlisted in the US Army Medical Corps. After basic training, Dach was shipped off to North Africa on 21 August 1943. During his time in North Africa, Dach worked alongside his father and mother, John and Maude Dach, both members of the Army Medical Corps. At the end of February 1944, he boarded the USAHS Algonquin to cross the Mediterranean Sea for Italy. After he arrived, Dach remained in Italy until January 1945. He then returned to the United States and was stationed at Walter Reed General Hospital in Washington, D.C., until he was honorably discharged on 24 November 1945. After the war, Dach worked as an OB-GYN in Long Beach, California, at Harriman Jones Clinic and later moved to private practice until retiring in 1980. After retirement, Dach moved to Oregon, where he remained until his death on 11 November 2001. The collection consists of postcards, a medicine box, photographic negatives, and photographs. The bulk of the photographs were taken by Dach but there are also a few photographs taken by German soldiers that Dach acquired during his service.
Geography:
Italia
Latitude:
42.833
Longitude:
12.833
Thesaurus for Graphic Materials:
World War, 1939-1945--Destruction and pillage--Italy
Airplanes--German--Italy
Nazis--Italy
Add to Collection