Military officers standing on a platform 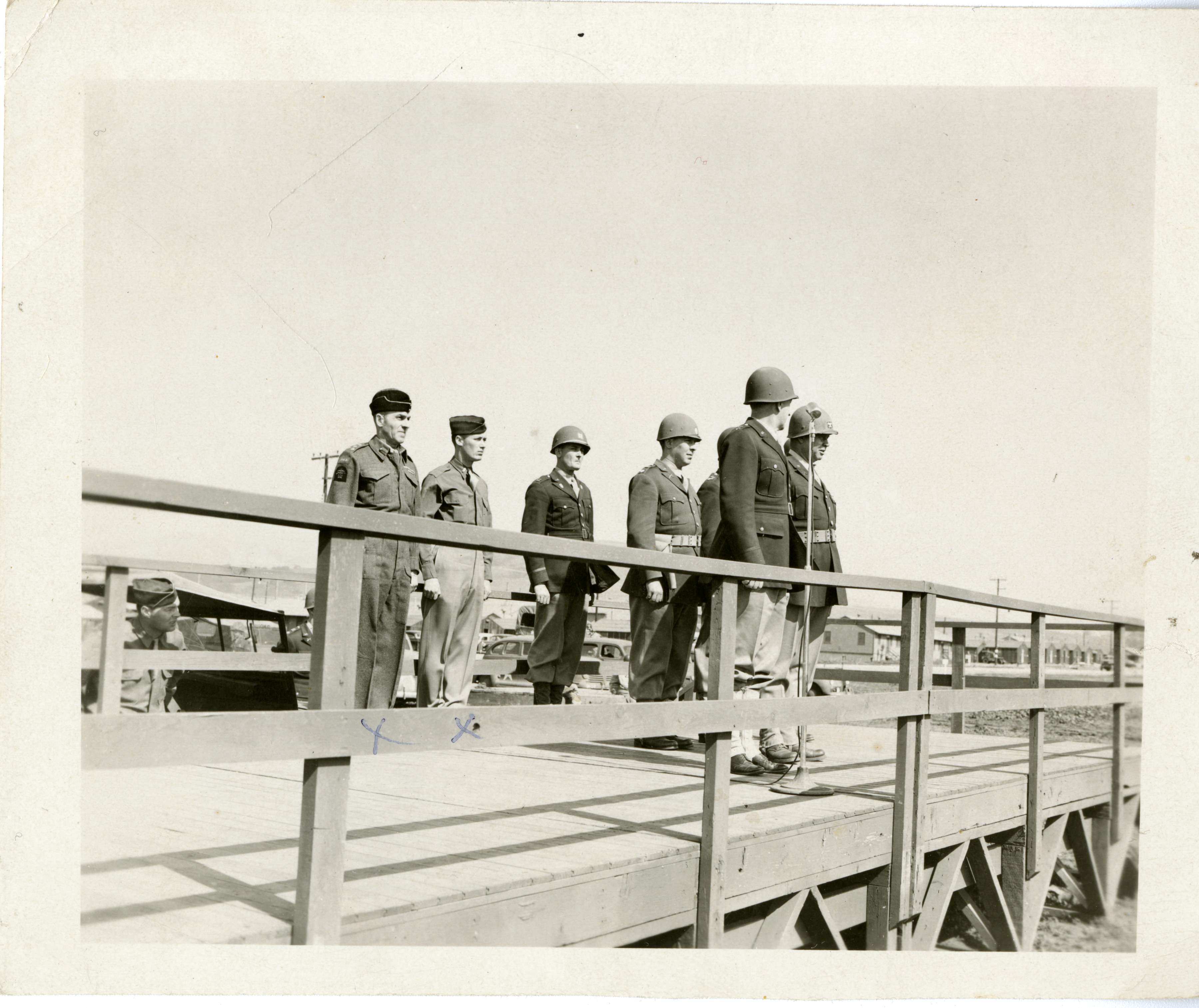 Photograph. Army officers standing on a wooden platform; First Lieutenant Hugh Ward is standing next to Canadian Brigadier David Roy Sargent [far left] in the back row; Major General Paul Mueller is standing behind a microphone. one of them in front of microphone. Two blue X's are marked under the men on the left. Location unknown. No date

Donor:
Mr. Terence A. Ward
Accession Number:
2014.070.007
Date:
1943
1945
Location:
Hometown:
Branch:
US Army
Theater of Service:
Home Front
Unit:
321st Infantry Regiment
81st Infantry Division
Campaign / Event:
POW / KIA:
Topical Subjects:
Military camps--American--Pacific Islands
Collection Level:
Items from the service of Captain Hugh Ward, who served with the 321st Infantry Regiment, 81st Infantry Division in the Pacific Theater. Hugh Joseph Ward Jr. was born on 18 May 1918 in Chicago, Illinois. On 17 December 1940, Ward enlisted in the United States Army with three of his friends. He was assigned to Company C of the 131st Infantry Regiment at Camp Forrest, Tennessee. In 1941, Ward’s unit was appointed Honor Guard for the 2nd Army Headquarters. After the Japanese attack on Pearl Harbor, Ward trained with the 81st Infantry Division after it was reactivated in June 1942. The unit shipped out to Hawaii in June 1944 and then to Guadalcanal in August, where they were attached to the III Marine Amphibious Corps. The 321st Infantry Regiment departed for Angaur in September and remained there for the entirety of the Battle of Angaur. The entire 81st Infantry engaged in the Battle of Peleliu and remained on the island until January 1945. They island hoped to New Caledonia and Leyte Island and settled in the Aomori Prefecture of Japan after victory was declared. During this time, Ward was the American aide to Canadian Brigadier David Roy Sargent. The 81st Infantry remained in Japan until January 1946. Ward returned to the United States and eventually settled in Claremont, California, where he remained until his death on 14 December 1992. The collection includes photographs, newsletters, a poster, and military documents.
Geography:
Pacific Islands
Thesaurus for Graphic Materials:
Military camps--American--Pacific Islands
Add to Collection