Servicemen resting at the frontlines, Germany, 1945 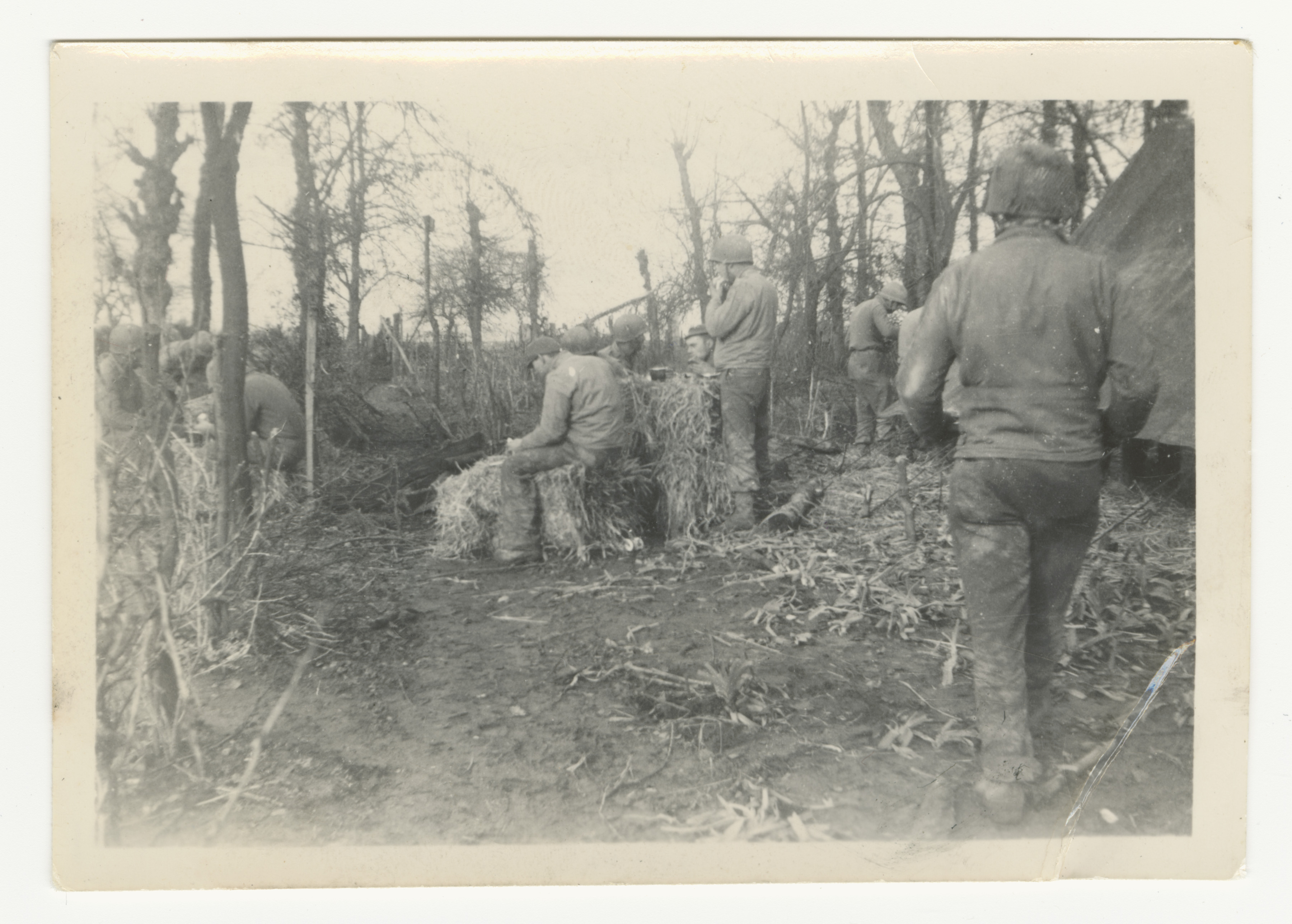 Photographs. Servicemen in Company I of the 116th Infantry Regiment eating next to a tent on the frontline. Personal caption on reverse: "Taken in front lines Co I 116 Inf." Germany. May 1945

Donor:
S2c Lewis Finkelstein
Accession Number:
2000.115.001
Date:
1945-05-
Location:
Hometown:
Branch:
US Army
Theater of Service:
European Theater of Operations (ETO)
Unit:
29th Infantry Division
116th Infantry Regiment
Campaign / Event:
POW / KIA:
Topical Subjects:
Soldiers--American--Germany
Collection Level:
Items from the service of Seaman Second Class Lewis Finkelstein, who was assigned to Command Task Force 127 and was injured on Omaha Beach during the second wave of the invasion of Normandy. The son of Polish immigrants, Finkelstein was born on 12 November 1925 in New York, New York. On 11 January 1943, he enlisted in the New York Guard and was then assigned to United States Navy’s Atlantic Fleet Advance Group Amphibious Force. In early 1944, he was stationed in Scotland for training with CMT 127. Finkelstein participated in the invasion of Normandy and was part of the second wave to hit Easy Red, Omaha Beach. His unit transported members of the 116th Infantry Regiment, 29th Infantry Division. During the amphibious invasion, Finkelstein’s left leg was injured and he was sent to a hospital the following day. After a stint in the hospital, Finkelstein reconnected with his unit and was part of the occupation of Bremerhaven, Germany until April 1946. He returned to the United States and moved to Tamarac, Florida, where he remained until his death in 2012. The collection consists of photographs from Finkelstein’s time in Scotland and Germany as well as photographs of Company I of the 116th Infantry Regiment in Germany.
Geography:
Deutschland
Latitude:
51.500
Longitude:
10.500
Thesaurus for Graphic Materials:
Soldiers--American--Germany
Eating & drinking--Germany
Helmets--American--Germany
Military life--Germany
Add to Collection