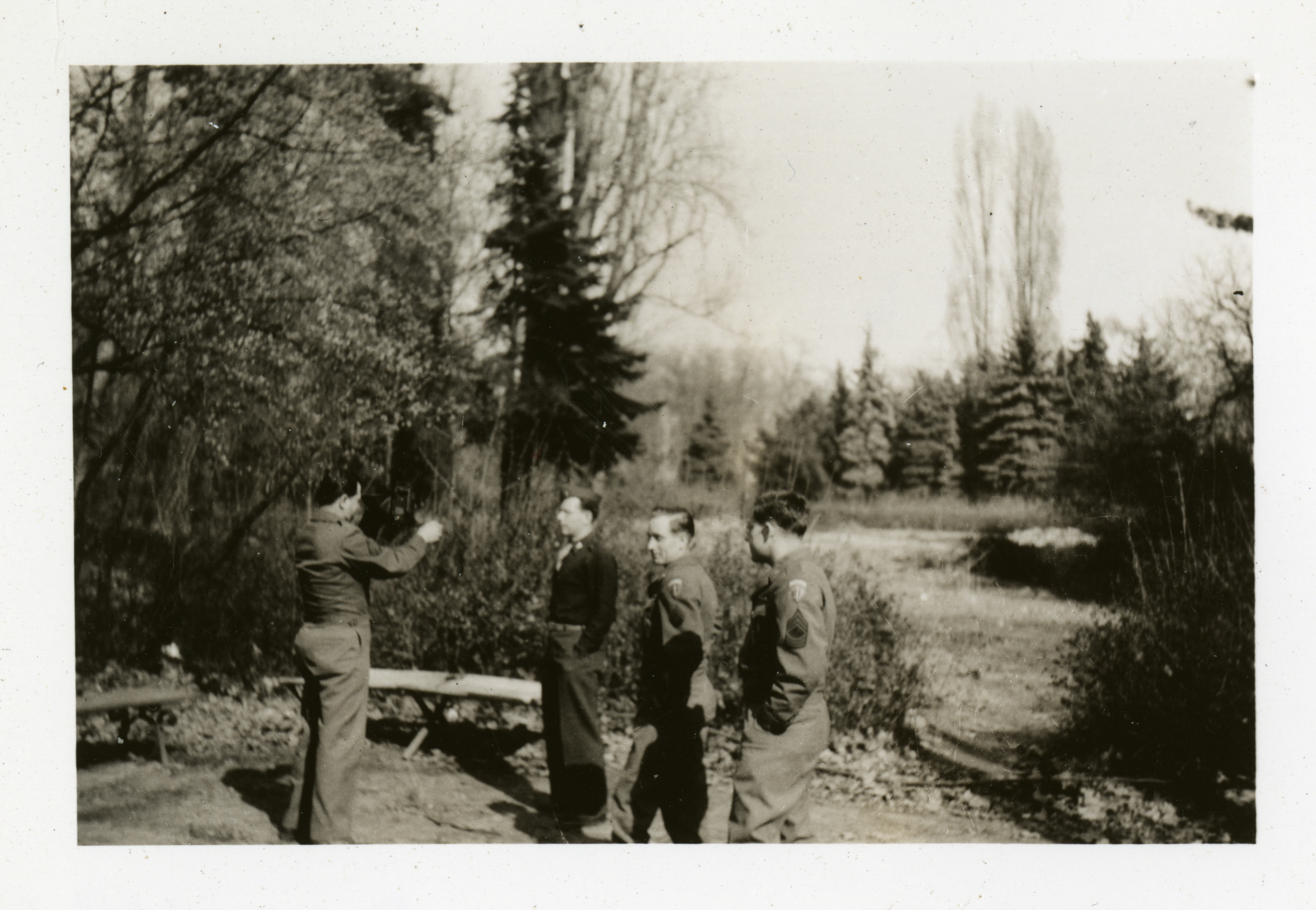 Four unidentified United States servicemen in forest; one having portrait taken by another. Germany. Postwar, Late 1945

Donor:
Mr. Barry Smith
Accession Number:
2011.168.529
Date:
Location:
Hometown:
Branch:
Theater of Service:
Unit:
Campaign / Event:
POW / KIA:
Topical Subjects:
Military personnel--American--Germany
Forests--Germany
Photographers--Germany
Collection Level:
Items from the service of Robert John McNary Smith. Robert John McNary Smith served in various engineer and weather units in the European Theater of Operations. In November 1942, Smith was granted military furlough from his position with the United States Geological Survey and joined the US Army. After completing basic training, Smith attended the Engineer Replacement Training Center, Fort Leonard Wood, Missouri. Upon completion of his training at Fort Leonard Wood he attended Officer Candidate School at Fort Belvior, Virginia, where he was commissioned as a 2nd Lieutenant. Over the next few months Smith attended various training courses, including a course about soil at Harvard, before he was assigned to the 1301st General Service Engineer Regiment and deployed to England in March 1944. Smith and the rest of the 1301st General Service Engineer Regiment landed at Utah beach on August 6, 1944. For the next seven months the 1301st supported the Third Army's drive across France and Germany. During this time Smith worked on roads, bridges, and flood control structures. In March 1945, he was transferred to one of the weather stations of the 21st Weather Squadron, 9th Air Force. While serving with the 21st Weather Squadron he was appointed as the section chief for the Flood Prediction Department based in Bad Kissengen, Germany. After the end of the war Smith served in the 2930th Engineer Technical Intelligence Team until he was discharged at the rank of captain in June 1946. This collection consists of over 600 photographs and postcards from Smith's service. The photos cover from training in the US all the way through his deployment and after the war ended.
Geography:
Deutschland
Latitude:
51.500
Longitude:
10.500
Thesaurus for Graphic Materials:
Military personnel--American--Germany
Forests--Germany
Photographers--Germany
Add to Collection