A vine, likely kudzu, growing up a tree. New Georgia Islands. Circa 1943 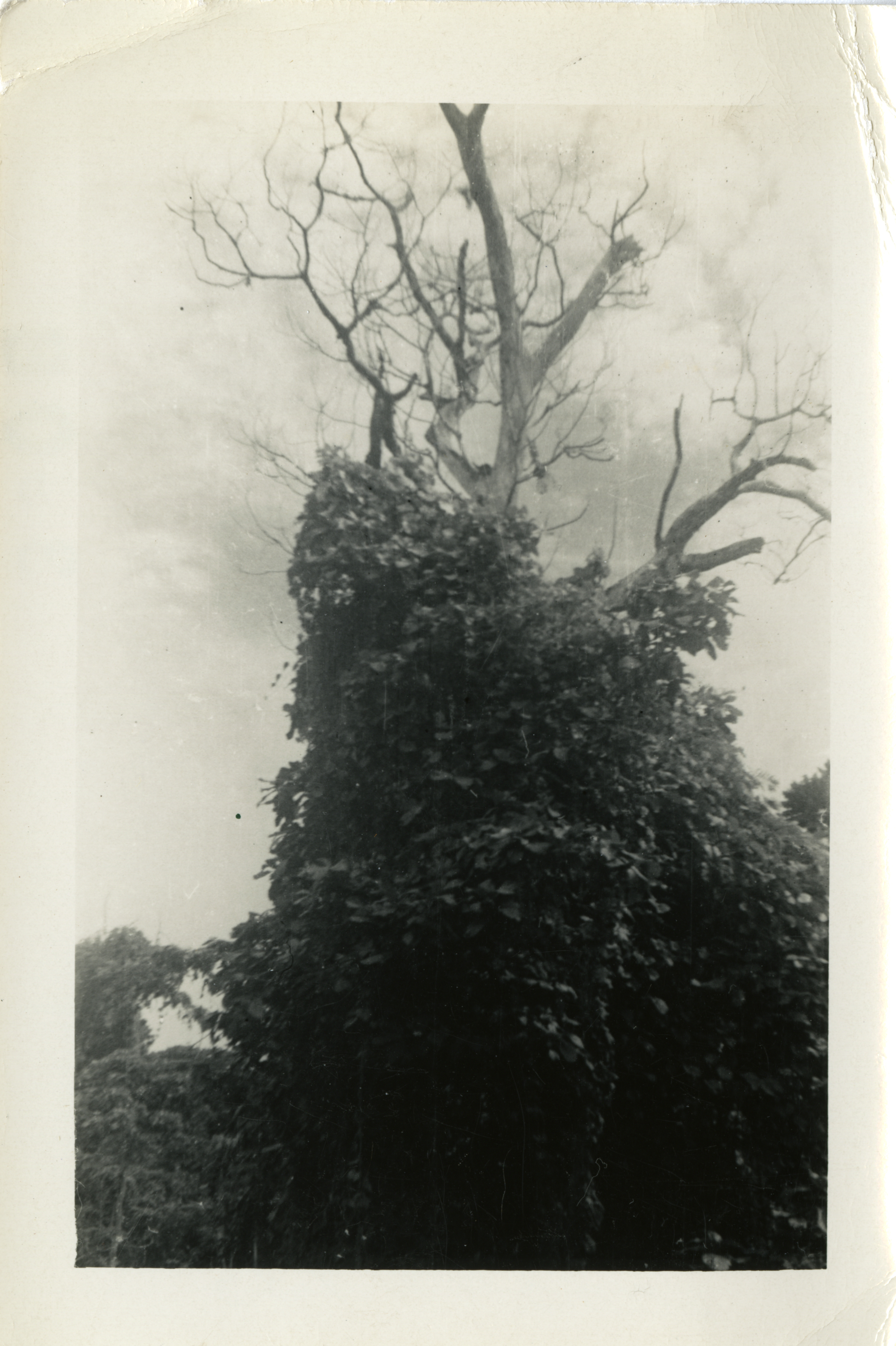 Photograph. A vine, likely kudzu, growing up a tree. New Georgia Islands. Circa 1943

Donor:
Ms. Maureen O&#039;Brien
Accession Number:
2013.491.135
Date:
1943
Location:
Hometown:
Branch:
Theater of Service:
Unit:
Campaign / Event:
POW / KIA:
Topical Subjects:
Collection Level:
Julian Pragoff Brown was born in Belmont, Massachusetts on 1 February 1897. He graduated from Culver Military Academy in 1917 and was appointed to West Point, but instead accepted a commission as a Second Lieutenant in the United States Marine Corps in April of 1917 when the United States entered World War I. He served with the First Battalion, Sixth Regiment of Marines in France and returned to the United States having attained the rank of Captain. In 1919, Brown was posted as the American Legation Guard in Peking, China until 1922. He served as an aide to Major General Semedly D. Butler in Washington, D.C. and Quantico, Virginia and later as an aide to General Cole with a force of Marines in Panama and Central America. In 1924 Brown was sent on a 30-month tour to Europe, Africa, and the Near East as part of a Marine detachment aboard the U.S.S. Pittsburgh. In 1927 he was sent to Nicaragua as Assistant Chief of Staff for Major General Feland commanding the Marine Brigade which was dispatched for pacification duty. While serving as the Senior Member of the Arms Commission he assisted in implementing the treaty of peace between President Diaz and Revolutionary Leader Moncado. Later he assisted in the organization of the Guardia Nacional Nicaragua. For his service during this time Brown was awarded the Navy Cross by the President of the United States and the Medal Merito by the President of Nicaragua. From 1929 to 1933 Brown served in Shanghai, China, primarily with the Fourth Marine Regiment and later joined Admiral Halsey in June of 1941 as his Fleet Marine Officer, Aircraft Battle Force, Pacific Fleet. After the start of the war, Brown’s duties changed as he became Task Force Intelligence Officer until the Battle of Midway. Upon Admiral Halsey's promotion to Commander of the South Pacific Forces, Brown was made Director of Intelligence, South Pacific Area and South Pacific Forces. After 31 months in the combat area Brown returned to the United States and was assigned to the Staff of the Naval War College as Officer in Charge of the Amphibious Warfare Section. Collection consists of over 200 photographs. After the war Brown served as District Marine Officer, Tenth Naval District in San Juan, Puerto Rico and then later in June 1948 he became Senior Naval Assistant to the U.S. Naval Representative, Military Staff Committee of the Security Council, United Nations. Brown retired from service July 1949 having attained the rank of Brigadier General in the United States Marine Corps. General Brown passed away on 6 March 1981 and is buried in Fitzwilliam Village Cemetery in New Hampshire. During his service Brown was awarded The Navy Cross, Two Silver Stars, and The Legion of Merit. The collection consists of 300 Signal Corps photographs taken in New Georgia.
Geography:
New Georgia Group
Latitude:
-8.500
Longitude:
157.333
Add to Collection