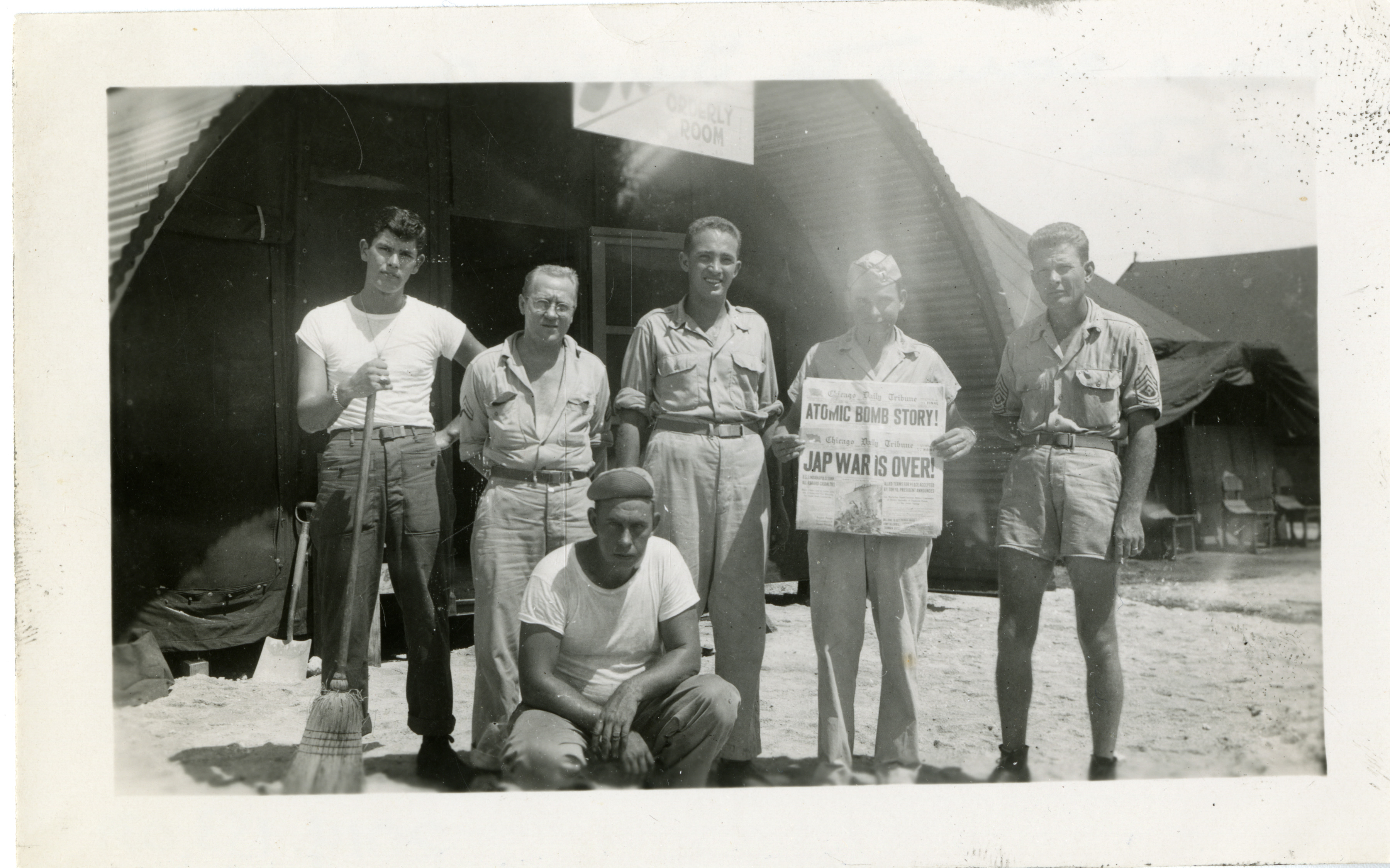 Photograph. Six members of the United States Army Air Forces standing in front of a Quonset hut. One of the servicemen is holding up a VJ-Day newspaper. Personal caption on reverse: "Peace comes to Tinian and the 570th. From L. to R. / Saga, Swider, Donald S. Capt. Bell, Sprad, and Oxeedie (kneeling)." North Field, Tinian. September 1945

Donor:
Mr. Donald S. Schlenger
Accession Number:
2014.153.039
Date:
1945-09-
Location:
Hometown:
Branch:
Theater of Service:
Unit:
570th Air Engineering Squadron
20th Air Force
Campaign / Event:
POW / KIA:
Topical Subjects:
Air bases--American--Tinian
Officers--American--Tinian
Quonset huts--Tinian
Collection Level:
Items from the service of Donald S. Schlenger, who was an officer in the 570th Air Engineering Squadron, 359th Air Service Group, 20th Air Force in the Pacific Theater of Operations. Schlenger was born on 9 May 1921 in New Jersey and is the son of R&S Auto cofounder, Herman Schlenger and his wife, Ruth. He grew up in South Orange and left to attend the University of North Carolina in Chapel Hill. Months before his graduation in 1943, Schlenger enlisted in the United States Army Air Forces. In 1944, he was sent to Harvard Army Airfield in Nebraska before being shipped off to Tinian. While on Tinian, Schlenger led a crew of enlisted personnel who repaired and maintained the central fire control systems on B-29 Bombers. He remained on Tinian until the end of 1945. Upon returning to the United States, Schlenger moved back to New Jersey and ran R&S Auto during the 1960s. Schlenger moved out of New Jersey and is currently enjoying retirement. The collection consists of over 70 photographs of Schlenger's time in the service as well as newspaper and periodical clippings.
Geography:
Tinian
Thesaurus for Graphic Materials:
Air bases--American--Tinian
Officers--American--Tinian
Quonset huts--Tinian
Add to Collection