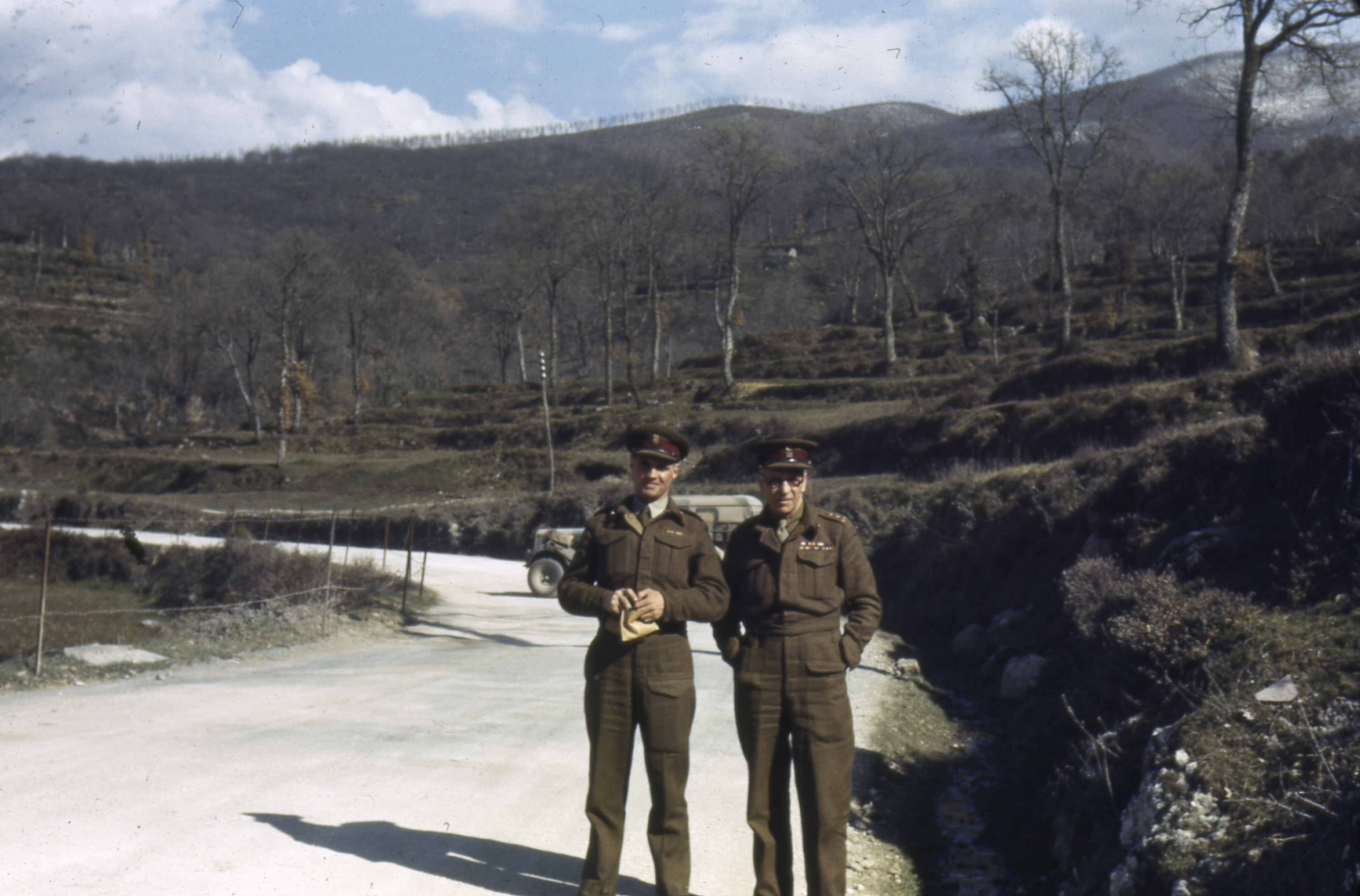 Slide. Two British officers standing on the side of a road. Italy. 1945

Donor:
Ms. Buntzie E. Churchill
Accession Number:
2012.333.148
Date:
1945
Location:
Hometown:
Branch:
Theater of Service:
Unit:
Campaign / Event:
POW / KIA:
Topical Subjects:
Military officers--British--Italy
Roads--Italy
Vehicles, military--British--Italy
Collection Level:
35mm color slides from the service of Dr. Edward Delos Churchill, who served in the United States Army Medical Corps in the Mediterranean and European Theater of Operations. Churchill was born on 25 December 1895 in Chenoa, Illinois, to Ebenezer Delos and Maria A. (Farnsworth) Churchill. He attended Northwestern University and then Harvard Medical School, graduating with an M.D. in 1920. He performed his residency at Massachusetts General Hospital and continued there as an associate surgeon. Churchill accepted a Moseley Traveling Fellowship in 1926 and spent time studying in Europe. Upon returning to the United States he moved to Boston City Hospital and specialized in thoracic surgery. Churchill married Mary Lowell Barton on 7 July 1927. During World War II, he was commissioned as a colonel in the Medical Corps and served in the North African-Mediterranean Theater of Operations as the Theater Commander for Surgery from February 1943 to October 1945. During his service he developed advanced methods for treating wounds, established blood banks, and improved on the process of air evacuation units for wounded soldiers. Churchill was awarded the Legion of Merit, the Distinguished Service Medal, and the European Theater Service Medal. In 1946, after his discharge, Churchill was appointed President of the American Surgical Association and continued as a Professor of Surgery at Massachusetts General Hospital. He Churchill passed away on 28 August 1972 at his farm in Vermont. The 157 slides taken by Churchill predominantly depict bombed-out cities, displaced civilians, and field hospitals in Italy and Germany.
Geography:
Italia
Latitude:
42.833
Longitude:
12.833
Thesaurus for Graphic Materials:
Military officers--British--Italy
Roads--Italy
Vehicles, military--British--Italy
Add to Collection