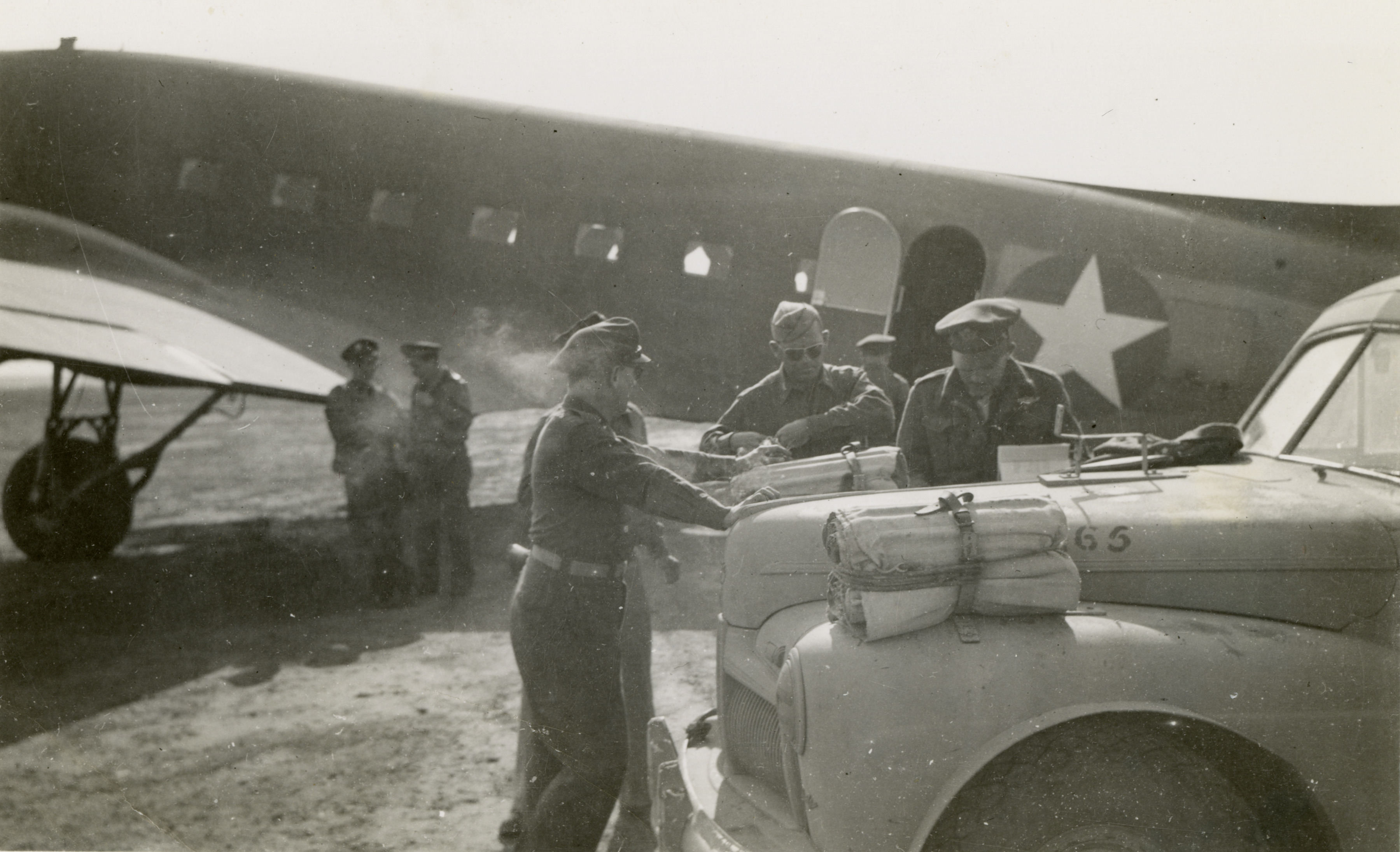 Gift in Memory of L.A. Rogers, from the Collection of The National WWII Museum
Description:

Douglas C-47 Skytrain (with Star-in-Disc insignia), with its side door open, parked on sand. Seven United States Army Air Forces officers are standing around, four of which are near the hood of 1940s Ford sedan. They may be loading, or unloading, some equipment. 1942-45

Donor:
Ms. Patricia J. Williams
Accession Number:
2009.278.621
Date:
Location:
Hometown:
Branch:
US Army Air Forces
Theater of Service:
Unit:
434th Bombardment Squadron
12th Bombardment Group
Campaign / Event:
POW / KIA:
Topical Subjects:
Military officers--American
Military uniforms--American
Transport planes--American
Automobiles--American
Insignia
Collection Level:
Lloyd Anthony "Frenchie" Rogers was born on 16 May 1914 at Patterson, Louisiana. He worked in timber and shrimping prior to working for Shell Oil. Lloyd was laid off from Shell in October of 1940 and he enlisted in the U.S. Army Air Corps on 17 October 1940 at Jackson, Mississippi. Rogers underwent basic training at Jefferson Barracks in St. Louis, Missouri and was transferred to the 12th Bombardment Group, 82nd Squadron at McChord Field. He underwent Mechanics School at Rantoul, Illinois and was afterwards reassigned to the 12th Bomb Group, 89th Reconnaissance Squadron (later changed 94th Squadron). Finally he was assigned to the 434th Bombardment Squadron where he served as a crew chief on North American B-25 Mitchell bombers. He served in this capacity from McChord Field, Washington to Esler Field, Louisiana and to North Africa throughout the battle of El Alamein, Sicily, Italy, and the China-Burma-India (CBI) Theater of Operations. He returned to the U.S. in March 1945 and for six months he attempted to get rid of malaria and amoebic dysentery. Rogers received his separation on 10 September 1945 at Camp Shelby in Hattiesburg, Mississippi. At the time of his separation Rogers had attained the rank of technical sergeant.
Thesaurus for Graphic Materials:
Military officers--American
Military uniforms--American
Transport planes--American
Automobiles--American
Insignia
Add to Collection